Season's End: Photos of My Store

This year, the Berkshire Mountain Region of Western Massachusetts (along with its New York State and Connecticut neighbors) is bringing in the autumn by finally and at long last having a bout of wonderful summer weather.
All season long we suffered through rain rain rain; hurricanes (Irene) and even a tornado or two! Or three…. And it was COLD! Now, suddenly, the sky is blue, the sun is shining, the breeze is gentle and caressing. Now, the tourists are gone, but the birds have come back! And the bees. (And the mosquitoes and wasps, too!) Where were they hiding all summer?
But still, there’s no mistaking that fall is here. Not just because the tourists are gone, but because there’s the mess of leaves falling everywhere; and there’re the sight and sounds of crops being harvested; and there are the county fairs and sheep-shearing contests and the apple picking. And, of course, we have the beautiful, beautiful trees fairly bursting with bright and vibrant color.
And this beauty is mine to enjoy; I see it out of every window; I see it wherever I go.
(I once knew someone who actually immigrated to the United States because he’d seen a Hitchcock film – THE TROUBLE WITH HARRY -- which featured a New England village much like ours, with the trees all decked out in breathtaking color.)
Yet this beautiful season which marks the end of tourists also marks the end of my summer selling season at Farshaw’s Too, the rare book and antique store I own. Columbus Day weekend, whether it comes early or late, is the season’s official end.
For me, that means a bit of vacation time with family and friends; it means shopping around for new inventory for my store; it means unpacking and carefully placing my new purchases for optimal viewing when I reopen for the winter holiday season.
So now that I’m “officially” closed, I want to tantalize you with photos of some fabulous new finds that you’ll want to purchase come December.  Hold off on your holiday shopping until I reopen on Friday, December 16th. It will be worth it!


Be warned: though I'm an enthusiastic photographer, I am not a good one. These photos are simply meant to give you an idea of some of the new things I have for sale. The descriptions here are very general; I expect to have a a more detailed catalog by December.

And remember: everything you see in these photographs is for sale. And I mean EVERYTHING! 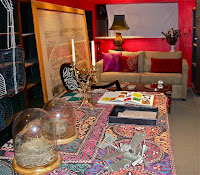 These few photos are of two of the three rooms that make up my store.  In the back room you can see a huge 1881 framed map of Newark, New Jersey.  Huge and heavy!
The photo below shows some of my favorite new finds.  The old North Egremont sign hanging from the shelves was a real coup; unfortunately, I live in South Egremont...!
The sculptural looking creature at the side of the sofa is actually an African headdress.  It sits on top of a paint can on the floor of the store, but men actually walked for miles wearing that huge and swaying thing on their heads!  It has red eyes made of wool, and the bottom of it is ringed with shells.  It's quite wonderful. 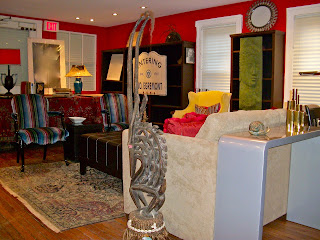 And speaking of Africa:  The amazing statue in the photo below is a Congolese Nail Fetish, about 150 - 200 years old.  It's about 6 feet tall, and looks a bit pained.

These fetishes can be dated so precisely because the ones that were used for ceremonial purposes over the centuries were small ones which could easily be carried from place to place.  But as with the Native Americans in the United States and the Aborigines in Australia, once the natives met the white man, they began doing their art for trade rather than for ceremony.  And the white man wanted BIG ones!
He is quite grand, I think.  Even modern:  Picasso would certainly think so.
But more conventionally modern is the huge Curtis Jere sculpture in the photo below.  Signed and dated (1983), it hangs above my desk and is a happy presence.
As modern as it is, it makes me think of older and more innocent times.  And it makes me smile.
(Actually, 1983 was quite a while ago...and it feels like over a hundred years ago to me!  So much has happened since then.  Blogs, for instance, to name just one small thing.)


And here's the very best:

I have lots of bags and and boxes of books like the one in this photo to sort, catalog, and shelve before reopening day, but before I do that and before I end this post, I want to mention that Pamela Grath of Books in Northport, last week's guest blogger, told me that visits to her blog spiked dramatically after her guest post on this blog.  Of course, we have all of you to thank for that.
So:  Thank you!   And enjoy the new season.
Posted by Farshaw@FineOldBooks.com at Wednesday, October 12, 2011

Love the photos, the objects, your shop, and you!

Wow, Helen, talk about a rich stew--my David would go crazy looking at all the treasures in your shop!
Me, I am always drawn to the mundane and was charmed (and a little shivery pretend-scared) by the garden tools in the glass vase but also, ooh, Mickey and Minnie! Wish we could drop in and mouse around to our hearts’ content, but since that’s not possible (this year!) I’ll wish you many eager customers come December!

Thanks Marash Girl: it means a lot to me that you do.

You are being too modest, Pamela. Nothing about your bookstore or your life seems mundane to me. You see beauty everywhere.

But I'm glad you like my 'treasures' and hope you'll soon be able to spend time in my worlds...

This is amazing, were did You get
all this treasures.

Also Your description of the Fall
season in the Berkshire is so
wonderfull, I miss it.

the store looks beautiful helen, and the autumn pics remind us why we live in this beautiful area.. thanks for your blog...

WOW-everything looks great! Can't wait until you get back here to the Berkshires - I don't like it when you're there!

miles by the lake said...

Looks like you have some wonderful stuff. I am sure the crowds will be there in December. Have a great break.