It can seem as though there’s a conspiracy in media outlets – both written and spoken – to report the coming “death” of printed books. The death is attributed to “villains” such as Amazon; so why is the tone of these reports usually comic at best, and gleeful at worst?
One reason is that the written media (like TIME, for example) enjoys “live streaming” in addition to the text that's in the printed edition, as new and more pointed ads are possible every few minutes rather than only once a week.
I’ve tried reading those "feeds," and I don’t really understand how they serve me.  I go to TIME for a thoughtful presentation of the news of the week:  if I want on-the-spot news; if I want film snips like “The Funniest TV Clips of the Week;” if I want to instantly know “The Number-One Way to Get a Flight Attendant Angry” or that “Chess Championships Lose Sex Appeal with New No-Cleavage Rule” – all from TIME’S latest “feed” – I can go to Google or Yahoo or YouTube, or even to PEOPLE magazine and the numerous “gossip” sites on the net.
And sometimes, I do:  but that’s not what I want from a [supposedly] sober round-up of the week’s news.
So:  not only do we have the Amazons against us, but printed material doesn’t get adequate support even where we most expect it.
I’ve already posted a funny (funny?) NEW YORKER cover depicting book stores without books; here are two more funny (funny?) covers:


Then there’s their “joke” of books being obsolete, an “artifact” one recognizes no longer:
The Internet is rife with jokes concerning life without printed books:

“We’ll need to buy real doorstops.
We’ll have to find another way to press and dry flowers.
Our bathrooms will no longer be cluttered.”

You get the picture.
And even when printed books are appreciated, it can be for reasons that make book lovers and sellers uncomfortable.  Here, an ad for a Prius tells us that although we have e-readers, we “need books for decoration.”
As noted in an earlier post, books are also being used not for their original function, but as a new “medium” for visual art. Here are examples from artist Brian Dettmer: 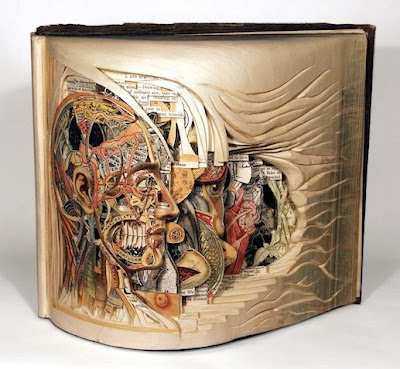 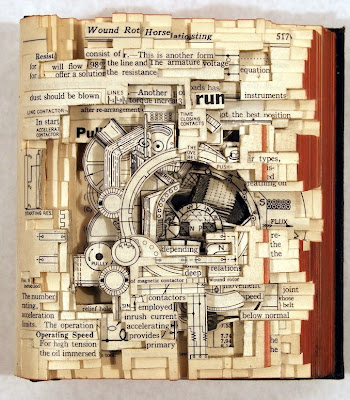 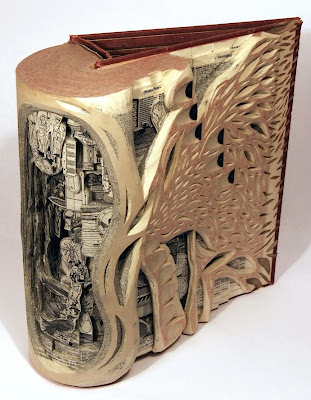 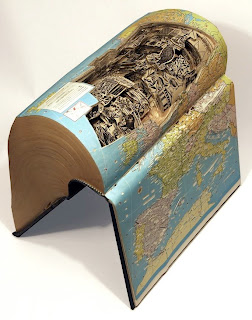 And a video of artist Su Blackwell's work:
Exquisite works, but why use books for these?  Why not just use paper and make bases of wood or leather?  And isn't this somewhat disrespectful to books?  (Or don't you think so?)
Libraries and librarians offer little help.  With the growth of ebooks and the advent of new laws requiring wider aisles for patrons in wheelchairs, many libraries have had to rethink their “mission” – as repositories of great books? as lending institutions meant to serve popular preferences? – and decide what to discard in order to create the required space.
The Berkshire Athenaeum in Pittsfield MA is one of the oldest libraries in the United States; it's a lending library that was also a repository for fine and rare books.  When faced with the need for more space, they decided that their primary function was that of a lending library; to that end, they sent to auction all books that hadn't been “borrowed” for 50 years.
Except for their extraordinary Melville and Berkshire collections which aren't part of the lending library, we – in our “Bibliofind Book Auction 'hat'” – auctioned off thousands of their books; 14 of them earned world record prices.
The main branch of the venerable New York Public Library had an even more arbitrary way of choosing what books they would discard.  In their wisdom, they decided to get rid of any book in which the page “broke” when its corner was folded!
Never taking into consideration the quality of the paper typical of the period; or the book’s value; or the importance of it as an artifact and historical document – the information was on microfilm, after all! -- among the things the library threw into the trash were thousands of early American pamphlets, including coveted ones from the time of the Revolutionary War. Thomas Payne, Benjamin Franklin, and the like:  all went into the trash.
Fortunately, a diligent bookseller was tipped off, and he rescued them before they could be carted to the dump.  Every year at Christmas, he sends a greeting card on the cover of which is a photo of one of these pamphlets along with the date it was discarded and its approximate value. (Often enough, in the thousands.)  Inside, a single line reads, “Your tax-payer dollars at work.”
And new libraries?  More and more, they contain row upon row of videos; row upon row of popular paperbacks like those of Danielle Steel; and they give classes in meditation and yoga and crafts.  I don’t have anything against a places like these, but what makes them “libraries” and not community centers?
Where libraries treat videos and mass paperback fiction as equal to – or more important! – than other books, they do no service to the future of printed books.
Now, the latest blow:  Congress has accused Apple and some publishers for “price fixing” by charging between $9.99 and $12.99 for ebooks.  As a result, it's expected that ebooks will go down to $5.99 each.  What will that do to the market for printed books?
Full disclosure here:  I read ebooks.  I travel a lot and I can carry far more ebooks with me than I can printed books.  And I can always keep old favorites near me.
But it is a totally different reading experience.
My bookseller friend and guest-poster, Pamela Grath, had a recent post on her blog, Books in Northport, which I urge you to read.  There she tells of an opinion that ebooks are a “purer” form of reading in that one is not “distracted” by the object that is a printed book.  The writer she’s questioning also claims that “we’ll get used to it” just as people got used to going from reading hand calligraphed parchment scrolls to reading printed books.
This is not quite true, as the experience of reading scrolls is very different from that of reading books: and it's the experience that makes the difference.
I like to go back and forth when I read a book; I like to keep a finger on an earlier page so that I can jump around easily; I like to curl the page and read both sides of it seamlessly.  I like to hold the page between my fingers, the book in my hands.
Hasn’t it been said that “the medium is the message?”  Well, it’s certainly a big part of it.
There’s nothing “pure” about the ebook experience of hyper-links and pop-out definitions, and the changing of fonts and of the brightness of the background; there’s nothing “pure” about glass-encased photos of beautiful hand-colored illustrations or photogravures.

On the walls of Bill Gates’ home hang huge screens on which there are ever-changing full-size photos of many important paintings.  Is this pure?  More to the point:  are these art?
As I noted in an earlier post, one learns a lot about history and taste and materials when something’s read in its original form.  Scrolls, for instance.
The Torah consists of the five books of Moses.  You can read these five in a printed book – the first five chapters in the Bible – or you can read them in a scroll, as originally presented.  In synagogues throughout the world, heavy Torah scrolls are lifted, unrolled to that week's pertinent passages, and read.

You can hear the crackle of vellum, parchment, paper; you can see cracks in the ink from years of rolling and unrolling; you can physically appreciate that this is one story, one continuous history that rolls on and on like the scroll itself; you can feel a sense of awe as you are reminded that this is how the words have been read for centuries.
It’s a different experience from reading these five books in a printed book, one page at a time.  Reading it as an ebook would be yet another and quite different experience.  But better?  Purer?  I think not….
Perhaps it’s just a matter of preference which of these experiences feels best to you, feels “purest.”  But I think it’s more than that; and I think that the “more” is what will keep printed books alive.
In THE BOOKS IN MY LIFE, Henry Miller wrote,

There’s a gratification that one gets from a printed book that cannot be duplicated, and the sharing that books make possible is part of that gratification, part of that experience.
Last week, NPR had a story about little libraries – sometimes only the size of a birdhouse! – which are popping up all over cities and towns; many even on front lawns.

“Put a little library on a short post like a mailbox, put it in your front yard and fill it up with books. Then people can help themselves for free.“

Take a book; leave a book.  And people love it.

"My kids will run over there.  I've run into friends of friends who I don't know well dropping off a book at the free library and finding, oh, this is just the right age and reading level for my daughter and taking it home.  I mean, there are all of these nice, little serendipitous connections that happen with your neighbors."


"One of the things that always just amazes me is how many people hug [us] when we actually put [books] in.  We constantly get emails that say 'I've met more people than I have in 20 years.'  People are always happy.  My favorite thing to do is sit on my porch and read a book and watch people open the library."

The “Little Library” movement hopes to build more libraries than Andrew Carnegie had built, and to have them throughout the world: they have already sprung up in 17 different countries.  (We have one at our town dump!) 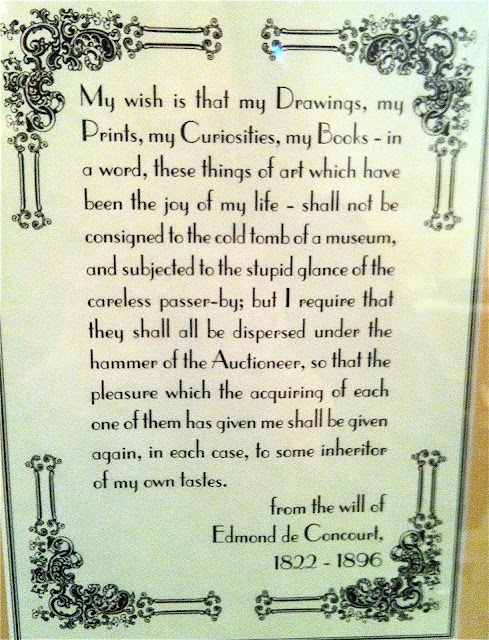 To which I say: "Amen."
Enjoy this 2-minute film; it communicates a love for printed books; and tells us in a pleasing way that books are forever: that there is nothing more “pure” than a “real” book.
Posted by Farshaw@FineOldBooks.com at Monday, March 12, 2012 3 comments