As much as I hate to agree with Tolstoy, (see: Would you believe, WAR AND PEACE?) HAMLET has never been one of my favorite plays.
I have seen innumerable productions, both live and on film, including a memorable one at Shakespeare and Company in Lenox, MA, in which a real mother-and-son duo played Gertrude and Hamlet – thus bringing to the fore the incestuous nature of that relationship, which more typically hovers a bit below the main action....
I always find HAMLET one of the most frustrating of plays:
Is he or isn't he?
Should he or shouldn't he?
Will he or won't he?
Does he or doesn't he?
Well, he finally does -- but rather too late, I think!  During the interim before he finally does, it causes a lot of unnecessary fall-out, including the deaths of innocents.  (Today we might call it "collateral damage....")
But I'm always eager for an excuse to go to Manhattan, so I thought a star-turn by a movie actor trying his hand at HAMLET was excuse enough.
The play was in a fairly small theater which made it easy to see the actors' faces, but I think the sets – mainly a dark bare stage with an occasional huge door or wall and the like – took away from the potential intimacy that this small theater afforded.  On a grand scale, too, were the white lighting effects that swirled over the stage from time to time.  This lighting, along with a dramatic musical accompaniment that foreshadowed the action – much as in a film – were all a bit jarring.
I wasn't crazy about the costumes either, as it was all "modern" dress.  Most wore black:  black leather bomber-jackets, tight black jeans, gray tee shirts, and the like.
I guess with the costumes, sets and lighting, the director was trying to make this a "current" tale.  You know:  "Hamlet is just like us."  (I don't think so....!)  In any case, it didn't work for me – but then, I'm a sucker for costume dramas, so I may be a bit biased here.
The acting, however, was very, very good.  Some actors played several parts, and they so disappeared into their characters that you didn't really notice that it was the same actor until you looked at the Playbill.
And Jude Law was brilliant:  the best Hamlet I'd ever seen.
His performance was very athletic, very physical – no moody Dane he!  This Hamlet was bristling with a kinetic, manic energy; and he seemed ready to burst, to explode!  One felt that from the first, he knew what he had to do; that from the first, he had decided to murder his father's murderer – despite that this murderer was Claudius, his uncle and now stepfather.
Throughout the play, it felt as though only the force of his will prevented Hamlet from doing what he knew must be done.  How can he make a widow of his mother yet again?  How can he kill Claudius while he was engaged in prayer, and thereby send the murderer's soul straight to heaven?
The questions for this Hamlet – using the very same words as every other Hamlet! – seemed never to be "should I" or "could I," but only "how to" and "when to."
And in his delivery, Law also managed to find a tongue-in-cheek humor that really did make this Hamlet seem more "human" than most; and which also helped illuminate some of the self-deprecating undercurrents of the character's thoughts.
But most memorable was the sheer physicality of Jude Law's performance.  He was all over the stage:  sometimes flying like a dancer; sometimes squatting heavily on the floor as if to control himself, as if to hold himself back, hold himself down....
His hands, too:  like a dancer's. Every muscle, every movement, every gesture told us something about this loving but tormented man.
I loved this HAMLET – all 3 & 1/2 hours of it!
Bravo, Jude Law.
______________________

“Live in HD” versus “Live at the Met”

I've never been an opera-lover, but I love the Metropolitan Opera's Live in HD broadcasts, and it has increasingly made more of an opera fan of me.
The operas are broadcast at the same time as they are being performed, so they’re seen “live” all over the world:  what a Massachusetts audience sees at 1:00 PM, an Arizona audience sees at 11:00 AM, a California audience at 10:00 AM – and so on, in all parts of the country and all over the globe.  It’s exciting to know that others are watching the same event with you, at the very same moment, no matter the time zone.
And in the comfort of your seat and the murmur of the people around you, you can almost feel as though you're an actual part of the same audience that you watch trickle into the Met; it can feel a bit like they’re joining you in your theater; and that the huge chandelier is hanging over your head, as well:  the very expression of a theater-goers “willing suspension of disbelief!”
But as the hosts on screen keep reminding us, “There’s nothing like actually being to a performance at the Met” – and, of course, that’s true. The acoustics are better at the Met, and therefore, the sound; certainly, the glorious music and those magnificent voices deserve that.
And the excitement of entering that huge and opulent theater cannot be matched by that of even the loveliest local movie theater; or even by watching on the giant screen at Times Square – though I’m sure there’s quite a feeling of excitement there, too!
Grand Opera deserves a grand space, and the Met certainly is that!
But in that grand, huge space, it’s often very difficult – if not impossible! – to see the facial expressions of the performers; to see the cut of the jewels; the opulent velvets and silks and lace; to see how hard the performers work – to see them sweat!  In the Live in HD broadcasts, however, you do get to see all of that.  Occasionally, the camera focuses on individual members of the chorus and of the musicians in the pit: these performers are plucked out of their seemingly homogenous crowd, and are suddenly unique members of the cast in a way that cannot be experienced in the Met.
I like this – and I don’t.
At the Met, you can see the entire stage at all times, so in a very real sense, you become the “editor” of the action, as you decide where you will look, who you will concentrate on.  In the broadcasts, the choices are made for you, and sometimes those choices leave me dissatisfied.
Nevertheless, I prefer the HD broadcasts because of the “extras” that the HD audience enjoys and which the opera house audience does not get to see.
While the members of the audience at the Met go for a stretch or sit restlessly in their seats, we at the movie theaters get to go behind the scenes.  We enjoy interviews with performers, directors, conductors, set and lighting designers – even animal trainers! – and I find those enormously interesting – especially when it’s a conductor’s or a performer’s first time at the Met. Their excitement is contagious! Often enough, the comments they make during these interviews – their interpretations of the roles, their enthusiasm – serve to intensify one’s pleasure in what is to come. And you find yourself rooting for them!
But the “extra” I like best is that during intermissions, we get to watch the crew change the sets behind that closed curtain:  and that is a simply wondrous, remarkable experience.  Entirely new worlds are created in 20 minutes; and you're on pins and needles, never believing that they'll manage it! I think it's worth the cost of admission just to see that!
Of course, opera's vary in the complexity of the sets, so some are more interesting than others.
SIMON BOCCANEGRA is a case in point. This opera personifies what opera is all about:  grand passions, timeless themes, extraordinarily sumptuous sets and costumes – and it’s a real tearjerker, too!  The sets for this production were staggeringly lavish, complex and diverse.
There were over 130 workmen (yes, all men!) changing the sets.  One set was "rolled" onto the stage – with performers already in their places! – while others were built before our eyes.
With hammers and nails, fabric and boards, a concrete-and-stone street with dark alleys and brooding gray-stone buildings was turned into a lusciously landscaped walled garden with a honey-colored "cottage" and gazebo; the garden and its walls were then turned into a palace throne room, complete with elaborately inlaid marble floors, heavily carved wood-paneled walls, and ornately painted frescoed ceilings...!
You watch, and you just can't believe your eyes!  Some men hammer “grass” cloth onto the “stone” floor, while others make sure that there are no bumps, no snags, nothing that might make a performer trip and fall.  These are experts in their field, and despite their speed, they pay attention to the smallest details.
And all the while, on the lower right-hand corner of the screen, you watch the 20 minutes count down by seconds:  at 7 minutes to go, you just don't believe it's possible, and you sit in anxious suspense.  6, 5, 4….  At 3 minutes to go, back stage is still bustling with activity.  And at 1 minute, they’re gone!
Poof!  The music begins, the curtains open….
This is itself a perfectly choreographed “performance.”  It is theater.  It is deserving of standing ovations.  And it is thrilling to see!
I think that the Metropolitan Opera is best for opera lovers; and that the Live in HD broadcasts are perfect for theater lovers.  Take your pick – or pick them both!
This season’s tickets are on sale now. 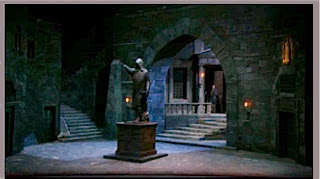 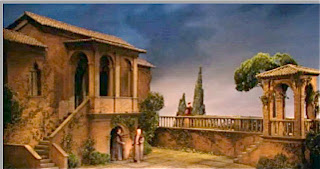 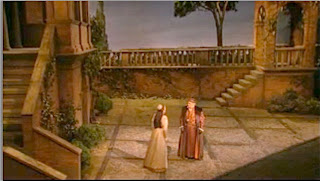 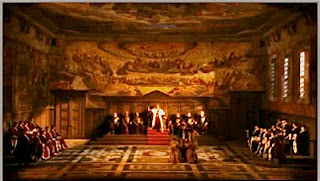