As much as I hate to agree with Tolstoy (see:  Would you believe,WAR AND PEACE?), HAMLET has never been one of my favorite plays.
I’ve seen innumerable productions, both live and on film, including a memorable one at Shakespeare and Company in Lenox, MA, in which a real mother-and-son duo played Gertrude and Hamlet – thus bringing to the fore the incestuous nature of that relationship, which more typically hovers a bit below the main action....
I always find HAMLET one of the most frustrating of plays:
Is he or isn’t he?
Should he or shouldn’t he?
Will he or won’t he?
Does he or doesn’t he?
Well, he finally does – but rather too late, I think; as during the interim before he finally does, it causes a lot of unnecessary fall-out, including the deaths of innocents. (Today we might call it “collateral damage….”)
But I’m always eager for an excuse to go to Manhattan, so I thought that a star-turn by a movie actor trying his hand at HAMLET was excuse enough. 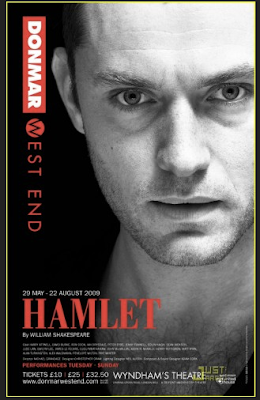 The play was in a fairly small theater which made it easy to see the actors’ faces, but I think the sets – mainly a dark bare stage with an occasional huge door or wall and the like – took away from the potential intimacy that this small theater afforded.
On a grand scale, too, were the white lighting effects that swirled over the stage from time to time.  This lighting, along with a dramatic musical accompaniment that foreshadowed the action – much as in a film – were a bit jarring.
I wasn’t crazy about the costumes either, as it was all “modern” dress.  Most wore black:  black leather bomber-jackets, tight black jeans, gray tee shirts, and the like.
I guess with the costumes, sets and lighting, the director was trying to make this a “current” tale.  You know:  “Hamlet is just like us.”  (I don’t think so…!)  In any case, it didn’t work for me – but then, I’m a sucker for costume dramas, so I may be a bit biased here.
The acting, however, was very, very good.  Some actors played several parts, and they so disappeared into their characters that you often didn’t notice that it was the same actor until you looked at the Playbill.
And Jude Law was brilliant:  the best Hamlet I’d ever seen.
His performance was very athletic, very physical – no moody Dane he!  This Hamlet was bristling with a kinetic, manic energy; and he seemed ready to burst, to explode!  One felt that from the first, he knew what he had to do; that from the first, he had decided to murder his father’s murderer – despite that this murderer was Claudius, his uncle and now stepfather.
Throughout the play, it felt as though only the force of will prevented Hamlet from doing what he knew must be done.  How can he make a widow of his mother yet again?  How can he kill Claudius while he was engaged in prayer and thereby send the murderer’s soul straight to heaven?
The questions for this Hamlet – using the very same words as every other Hamlet! – seemed never to be “should I” or “could I,” but only “how to” and “when to.”
And in his delivery, Law also managed to find a tongue-in-cheek humor that really did make this Hamlet seem more “human” than most; and which also helped illuminate some of the self-deprecating undercurrents in the character’s thoughts.
But most memorable was the sheer physicality of Jude law’s performance.  He was all over the stage:  sometimes flying like a dancer; sometimes squatting heavily on the floor as if to control himself, as if to hold himself back, hold himself down….
His hands, too:  like a dancer’s.  Every muscle, every movement, every gesture, told us something about this loving but tormented man.
I loved this HAMLET – all 3 & ½ hours of it!
Bravo, Jude Law.
Posted by Farshaw@FineOldBooks.com at Sunday, August 21, 2011


this is fantastic, You are a great critic.
You should get royalty from Jude law.

Yess! I agree with Ester :) This is really fantastic writing, and made me want to see the play. Don't people get paid for writing these sorts of pieces? Post another!


I think Netfix has Jude Law's Hamlet on DVD.

I recently saw The Merchant of Venice at Washington, DC's Shakespeare Theater. This production located the play amid immigrants in NYC in the 20's. I had forgotten how shockingly anti-semitic it is and how funny the comic relief. The cast was superb, especially Patrick Page as Shylock. Netflix doesn't have Law's Hamlet yet, but I'll keep trying.

It's easy for me to forget that screen actors often come from the stage, and return there. Thanks, Helen for the reminder, and for sending me off to google clips of Jude Law in this Hamlet. He completely shattered my highschool image of the character, which is a good thing. He is everything you said.
Cheers,
Peter

Thanks Peter. And thanks for joining my blog site.